Following on the heels of the “By and By” single and album, The DOVES latest single, “Maybe Tomorrow”, is recorded, mixed, mastered, and ready to go.  The video is about 2/3 edited, and should be up and online by next week; the song available through CD Baby, iTunes, Spotify, and other digital venues.  Here is a sort of “sneak peak” — a news clip of 13WMAZ’s coverage of the inaugural “Joey Stuckey’s ‘Alive Day’ Festival”, which features Trena and I playing “Maybe Tomorrow” in the background.  That fits very nicely, considering that Joey did the masterful mastering for the track, via the auspices of his Shadow Sound Studios.  Joey, of course, recorded all of our earlier work, and plays bass on a number of tracks — e.g., “Mirage”, “Day”, “Shut My Mouth”, “Wild and Strange”, many others. 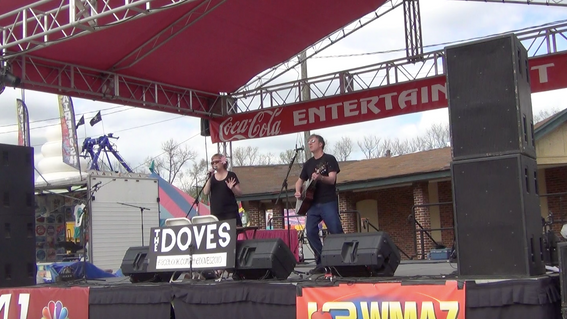 The “By and By” project was a qualified success, I guess.  Our music got exposure via internet and OTA radio in, among other places, Britain, Germany, The Netherlands, California, Washington (both the state, and the DC area), New York, New Zealand, Singapore, and several more.  We even got a notice that “By and By” (the single) was #8 on Valley FM 89.5/BanksRadioAustralia in Canberra.  I’m a little embarrassed to admit that I didn’t even know that Canberra was the national capital until relatively recently.  I guessed I just assumed it was Sydney.  It’s rather gratifying to think that half a world away, enough folks liked our sound to make the charts Down Under.