The DOVES latest vid, “Do Something Clever”, has been entrusted to the capable hands of the incomparable Joey Stuckey for mastering.  Joey is easing back into harness after a serious surgery back in early November.  DSC should be available early next year (Update -- Jan. 17, 2019:  "Do Something Clever" has been released!  Click "MUSIC" tab for download.  Also available on iTunes, Spotify, etc. Click image or widget for video).  The proposed cover art is included with this article.  The song finds us in a “film noir” frame of mind: 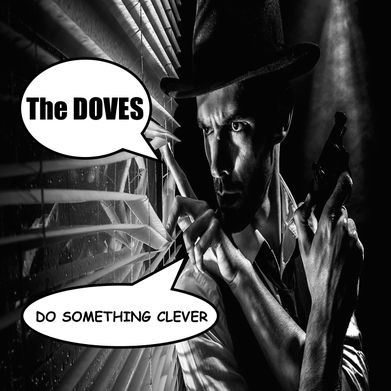 “ ‘Do Something Clever’ perhaps conveys a little bit of the widespread perception that our society is ready to burst apart at the seams.  Everywhere, it seems, there is an air of incivility and divisiveness and malice and mistrust, fueled by ignorance and bias and unexamined presuppositions and beliefs…”.

Today, I (Wade) posted the 12th in a series of “home video” cell phone recordings for our facebook page.  They have all been solo projects — Trena is rightly proprietary over her recorded voice and image, and the videos are lo-res versions of each.  I don’t mind such representations.  My entire musical career, until we hooked up with Joey and his Shadow Sound studios, has been almost entirely an exercise in lo-res and lo-fi.  Heck, throw in “lo-rent”, too.  Recording with Joey was a calculated step in rectifying that reality.  Recording the facebook vids solo simplifies things.  And allows me to choose material from the back of the catalogue, so to speak, that we’ve never attempted in live performance (e.g., “In The Middle”).  As well as stuff on our “to do” list, that we haven’t gotten to yet (such “The Same Time”, which we did a while back in a one-take, acoustic and vocal recording at Shadow Sound.  A multi-tracked, bass and drum version still awaits.  The one referred to may be heard, in un-mastered form, HERE).  Besides — “lo-res”, “soft focus video really isn’t a problem for a man of my, uh… “experience”.   ( ^ ;

I discovered today, while posting “Blessed Are You”, that the entire inventory of facebook vids, going back to July of 2018, is archived at the “Videos” tab on our page.  Clicking HERE will direct you to them.  The vids are a way of partially satisfying the impetus for live performance, which seems to be waning somewhat.  It almost seems more trouble than it’s worth — the haggling with disinterested booking agents in order to schedule to perform acoustic versions of songs that are written (and recorded) as multi-piece rock arrangements, for the blank looks of audiences in nearly empty venues who are wondering when the cover of “Whipping Post” starts.  But then again, we never fail, when playing live, to connect with at least one person who goes to the trouble to tells us they REALLY liked what we’re doing.  So — we’ll see what the future holds in that regard.  Meanwhile, we’ll continue the studio “full band” versions of material — such as the forthcoming, and aforementioned, “Do Something Clever” — and churn out intermittent material on facebook, which is (in the words of the Stephen Colbert show’s intro) “live on tape.”  And routinely getting high “relevance scores”, according to the arcane lingo of facebook (which is not nearly as arcane and inscrutable as their rules — another topic, for another time…).